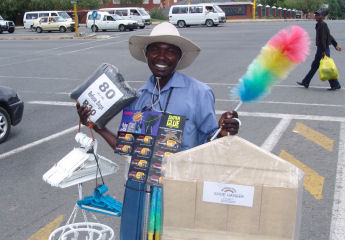 At one time the feather-duster-and-broom man was a slight phenomena in South Africa.  One would see him on almost every street corner.
Recently I was happy to spot another feather-duster-and-broom-man, and my thoughts turned to the economy.  Now here was a man who was trying to make a buck, despite the fact that he really had no hope of scratching a living out of selling feather dusters.   But that was not the point, or the reality of the situation.   He most likely lived on the few pence he made for the day, even if it was just paying for his transport to town to collect the dusters.   He had decided to grab at a chance to do an honest days ‘work’ – walking the streets and selling feather dusters, but in fact he was an entrepreneur,  he was creating a career – and one day that may well become the way of the future.

I find the Street People around us so interesting.

There are the Car-guards at the shopping centre.   With a bit of organising, they work for a man, or company, who create opportunities for those who are unemployed.  Depending on the goodwill of the customers, whose cars they ‘guard’,  help unload the shopping trolley, courteously stop the traffic to let you out of your parking spot, and return the trolley to the shop, they can and do make a small survival living.   Most do it with a smile on their face, a polite greeting and a wave good-bye.    If you don’t have small change to give, some say,   ‘never mind next time’!

There are people who stand at the traffic lights, burnt by the sun, to beg for a penny or two.     There is a particular robot in the suburbs I ride through where a decent looking white lady, in a shoe-string top and trousers, stands unashamedly hoping for a bit of support from the passing traffic.
When I see her I often wonder what story she would tell, and why she does what she does to bring in a little finance.
Further into the inner city there are many scruffy looking young men, who, one can tell, have addiction problems.    My heart goes out to these young people.   What chance have they to make a decent life for themselves.   Life on the streets is hard, its a hell of its own.

Giving it some thought, I understand that there is a  strata in the art of making a living.
From the beggars at the street corners, to the feather duster man, the Car-guard, the Fruit and Veg Vendors, the Zimbabwe wire and bead weavers or  the African mamas that capture the tourist trade with their handcrafted talent  – these are those who have nanoscopic to miniscual to trickling to irregular  incomes – all trying to make a living and meet the high demands the economy makes to extract a pound of flesh from a half-loaf of bread needed to still hunger pains.
And although they may be on the bottom rung of the food chain, they form the bulk of the informal income, which if well conducted should be included in the greater scheme of the economy, with extra benefits and favour. 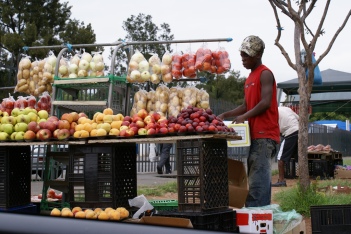 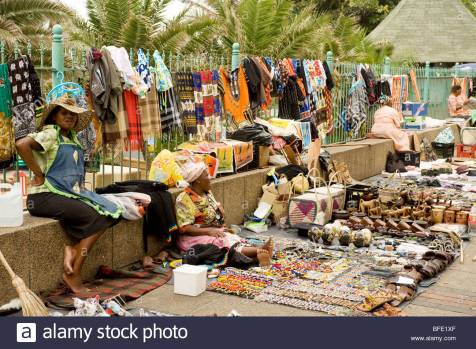 That is just the bottom end of the economic level of any one country.     For  Poverty is everywhere.    But all is not doom and gloom.  There are the middle and upper and higher echelons in our societies, (that are far removed from the street level) – and that make a good living, and a ridiculously rich living, (those who can buy a Claude Monet painting for over a million dollars !!)   Albeit a very beautiful painting, how can such a price be justified, I ask.
When I saw this on the global news, I said to my son, just hang on to my ‘ pencil artwork’ in enough years it may well be worth a foolish man’s fortune!

I disdain negativity.   But now and again, I despair of the future.   With every societal revolution beginning with the Industrial Revolution – the discovery of steam power, electricity and the then world-widening trade routes, to the Automotive Revolution,  the Sexual Revolution of the sixties, that loosened and cracked up our moral foundations, marking the place for the perversity and confusion to come,  to the current Information Technology that banishes all geographic and financial boundaries to the nether-sphere.  And now the foreseeable future of the A I  – Artificial Intelligence,  and, even more scary the possible self-annihilating age of the oncoming Quantum-Computer !

And its all called  ‘Progress’.   There is no doubt that much benefit and convenience (the up-side)  have been derived from these discoveries in our history.    But when I look back over these man-made wonders,  intelligentsia and innovations  – and their out-workings,  I  see more people unemployed.   Is unemployment with its desegregation the malady of our times :  no work, no money, no future no hope – more poverty and despair, riding on its wake of drunkenness addictions and depression within our societies ?

Will the future hold more Street People, like the feather duster and broom man ?
But he has with him the tenacity to do an honest day’s work, with a dream of a better life.  He has hope, and that will carry him through to a better tomorrow.
So the next time you see him, consider buying a feather duster or broom,  even if you don’t need one,  you will be fuelling the future with hope !
Like poverty, dust is everywhere, and settles to grime if you don’t dust and sweep regularly.      Clean homes gather dust too !

So support the entrepreneurs,  those ‘career creators’,  for one day, in the fast approaching robotic future,  (remember robots they don’t ask for wage increased, don’t need medical aid, don’t protest, or strike for rights, – they are the perfect employee !) …  who knows we may all have to become entrepreneurs with tenacity and hope in our hearts.

But don’t despair with me, keep in mind that the future is ultimately in God’s hands,  and He knows the end from the beginning, we just need to be good stewards of what has been entrusted to us, and to consider the poor and the needy among us.

Psalm 41: 1  Blessed is he who considers the poor,
The Lord will deliver him in time of trouble.

As February is the month for Love and Valentines and all I decided to go out on a quest and look for love wherever I could find it.

A bag of coppers (small change) were cluttering my cupboard. These I had been saving to give to one of the street people I had come to know. He is George the Carguard, who treads the parking lot at the Post Office in the Village. I stopped the car and George came over to shoo me on, but I said to him “George I have a bag of coppers, would you like them?” “Yes, I like that money” he said, beaming from ear to ear. “Thank you madam,
you are like Jehovah to me”. “Mmm well yes, Amen George” …not quite sure what he had just said. “Today I am going to buy me lots of food from Pick n Pay and eat well”, he said rubbing his tummy. “Well enjoy yourself George” I replied. “Thank you, thank you madam, God bless you”. ” God bless you too George” I said as I drove off. Well the warm glow of that little conversation blew my hair back. I had intended to give a little love and instead was the one who had received a ton more than I gave. George’s response was magnanimous, as it so often is from the African people who have a heart full of love, in spite of their poverty circumstances.

I was looking for a parking spot, impossible in the Village on a Saturday morning, but found one right in front of Woolworths where I wanted to be, to buy some chocolate muffins for Greta my sister-in-law for Valentine’s day. As I came to pay at the till, the attendant beamed “happy Valentine’s day to you”. I felt that warm glow again. But there’s more. As I walked up to my car, a traffic officer was just finishing off the ticket for the car parked next to mine. I scooted in and out of there so fast, with a “thank you Lord for loving me today!”
You can find Love in the circumstances of life, in strange places even in some strange Strangers!

I then took myself off to the Mall about ten blocks away. As I circled for parking I saw a young man with a basket filled with red roses. Yes, you’ve got it right young man, keep the love alive, I thought to myself.
Then on to my shopping errand where I had to stand in a queue almost a mile long and eventually came to an attendant that looked tense and a little grey. As we finished the transaction I just blurted out to her “have a happy Valentine’s day”. Well the grey lifted and I saw sunshine fall its place. “Thank you, I forgot it was Valentine” she said, and I saw her mind make a mental note to remember her loved one today. I glowed again as I walked away. Well enough of this loving people, now its time to love me! I took myself off for a cool green lime milkshake at a restaurant that, if you sit in the right place, you can observe the crowd coming down the escalator of the mall, and take in the crowd of the eating place at the same time. Just sitting quietly watching Life and Love at play, a treat indeed!