Some say that eight is the number that signifies new beginnings ?
This might be true for me too, as there is an eight in 2018, and I have drawn the line on being wasteful with my time. Living in the slow lane can cause one to stagnate, and that is not a good or acceptable thing, when life is so full of wonderful sights and sounds and beauty all around, waiting to be captured and appreciated in one form or another.

So I wrote myself in for a few drawing classes. I think I’ve always had a slight bent toward art, and an inkling to want to paint or draw, but knew that would require more talent than I had.

When I met up with June Dovey, who is a fine-art artist, and a teacher of immense patience, she agreed to teach me to draw, and said “if you can draw you can paint. ”   And so began my classes on tones, shapes, forms  and shading with portraiture and perspective to follow later – the foundational basis of drawing, for art,  – and for getting to know oneself a little better. 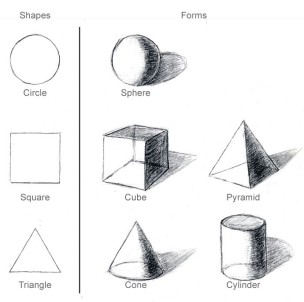 It takes a large smidgen of courage to step into the unknown.  All sorts of hidden emotions, lying dormant, began to rise up and whisper in my head. There was Self Doubt, an old familiar voice spoke softly ” You, draw ! – you don’t have the talent !” What if its wrong ? Rejection put in its penny’s worth with, “what if its not perfect?” and “it won’t be good enough, these people are real artists.”

“What are you doing here ?” I asked myself, more than one time.

I did not know that a blank sheet of paper could be so intimidating. “It’s just a piece of paper” my teacher would say over and over.

Then I discovered the smidgen of courage I needed to take up the challenge and began to draw the lion !

My first drawings were skew and misshapen, and looked like they had been drawn by an arthritic hand, but my dear teacher would just say  “keep going.”  I did and things got better.

New beginnings,  and a new world began to emerge for me. I began to “see”  simple everyday things, which have always been there, but now I see them in shapes,  and forms with shadings.  And if I apply shading to my drawings they “pop” into reality, and become dimensional. Its amazing! Light and shade are imperative to drawing.  And without shading all is only one dimension.  Light, dark and shading bring dimension, and depth to pictures. I know everyone knows that, but it was new to me, especially as I saw it come alive  before my own eyes !

And isn’t life itself like that, for without light there is no shadow or shade, all would be darkness. And without an object, there would be no witness to light !!  Here indeed is serious food for thought. Read more here.

The class on portraiture was a difficult one for me.  It needs a lot of practise.  But what I discovered was the eyelid !!   I’ve never noticed eyelids before, and we all have them. When I now look at people I see their eyelids.   Even the presenters on the TV screen, I look for and see eyelids !

Drawing helps you see things, you have seen before, but haven’t “seen” them into existence ! – if you know what I mean ?

Its been a wonderful few weeks of drawing, and I hope to continue to learn more, when the classes resume.

Just to show off some of my new-found “talent” I’m posting a few drawings.  Now don’t be to critical, its a new beginning for me.  I do not have much talent, but what I have has been taught to me, by a good and lovely teacher, who loves art.

I  took great comfort in a quote I came across from Emilie Lee, a seasoned artist who said this to the question asked :

What is the most overrated virtue bestowed on art ?

“I think the idea of talent is so misunderstood.  I don’t even use the word.   Artistic skill comes from many years of practise, commitment and hard work.   The way we talk about talent among artists is so unproductive.   I often meet people who tell me  ” I have zero artistic talent”  and I think that is a self-defeating statement !   I think they just haven’t had the right teacher come along. 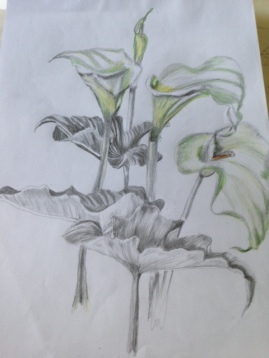 My Arum Lilly.  One of the initial attempts, and starting to dabble with colour.

I have named my first lion-drawing Courage.  It took courage for me to draw this one. Not half as nice as the photograph I referenced,  but you can see its a lion, yes? 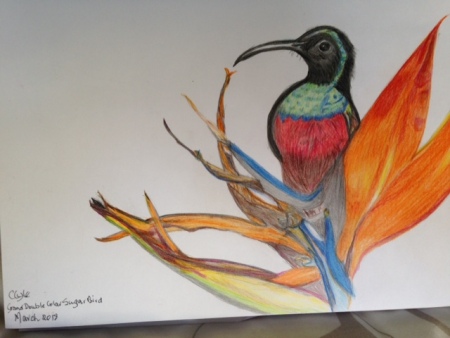 The sugar bird and Strelitzia turned out to be a nice surprise.

I love colour, and discovered water-colour pencils !!   What a find.

I drew the line at stale, stagnate and same-old-same-old, made a    small new beginning and discovered the world of drawing, of paper and pencils, of shape, form, light and shadows – and if you add a splash of colour, the pictures reverberate with vibrancy.

Drawing has taught me what could be a life lesson too – always keep your pencil sharp !!

12 thoughts on “Drawing the line.”